FREE Shipping in the US! To Canada, flat $17 includes prepaid duties!

EVER HEARD OF “FAMILY CAMP?” IT IS THE BEST SUMMER FAMILY VACATION!

THE CONCEPT OF FAMILY CAMP

Ok. Think Dirty Dancing without the country club feel or the scandal. I never knew family camp was a thing until I met Scott. His parents met on staff at a family camp as teenagers. (Isn’t that awesome?!) His mom is a third generation family camper. Her grandpa helped build one near Yosemite in the early 1910’s. It’s just like a kid’s summer camp, but the whole family goes and lodges together. Every campy activity you can dream up is available and the food is provided. I repeat. Everyone in the family is entertained all day and three delicious meals per day are prepared for you. You are breathing mountain air, being fed delicious food you didn’t cook, and your kids like it better than Disneyland. You have to try it! In case for some reason you aren’t rushing to google up the nearest family camp, let me show you what it’s like.

THE HISTORY OF FAMILY CAMP IN OUR FAMILY

We just returned from our eighth annual family camp vacation. We started when the girls were four and six and haven’t missed a summer since. Our first three years, we went to the same camp Scott’s great grandpa helped build and Scott’s mom grew up attending. Scott went every summer as a kid, too. Here’s a picture of Scott’s great grandparents and grandma in front of their platform tent in 1936 and one of Scott’s dad, Dave with the camp staff in 1960. Dave is in the top row, second from the right. It was pretty rustic and had not held it’s quality, so we searched for something else to try. In 2013, we discovered Montecito Sequoia Family Camp and have gone five years straight. It is privately owned and situated in the mountains between King’s Canyon National Forest and Sequoia National Forest. From Reno, you drive to Fresno, hang a left, and drive straight up the mountain to the top, around 7,500 feet. It takes us 6 or so hours. I’m not going to lie, the drive is a bit brutal. Highway 99 through central California is unsavory, but it is so worth it! 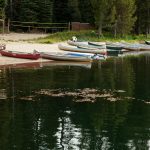 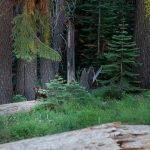 This camp is run June through August for 10 6-night sessions. The campers arrive Sunday afternoon for check-in and the kids receive their group t-shirts. Of course put them on right away and start looking for other kids in their group. This year Delaney was a bear and Bailey was a cougar. (Kids from age 2-18 are divided into groups for optional supervised group activities. Minnows:  Age 2, Tadpoles:  Ages 3 – 4, Chipmunks: Ages 5 – 6, Marmots:  Ages 7 – 8, Bobcats:  Ages 9 – 10, Cougars:  Ages 11 – 12, Bears:  Ages 13 – 18)  The campers settle in to their rooms, dinner is served (more about the food in a minute), and then an orientation is given. The staff make a noisy, festive entrance, do a quick intro, and then whisk the kids off to do an ice breaker activity with the groups while the nuts and bolts are explained to the adults. Each day is divided into two morning and two afternoon activity sessions, and each evening is a different family activity. After the evening activity, there is singing around the campfire and then everyone crashes into their beds exhausted. Each activity period, the kids can be with their groups doing fun things like archery, rock climbing, canoeing, swimming in the pool or lake, fort building, tie dye, leather stamping, ceramics painting, horseback riding, tennis, trampoline, air riflery, paintball, jiu-jitsu, fencing…I can’t list them all! If you look at the schedule, any activity that has the word “open” next to it means anyone can go to that activity during that period. So you can go do any of those things while your kids are in their groups, or you can do those things with your kids if they want to skip the group that period, or you can flop down on your bed and read one of the stacks of books you brought to read. You can also sit and chat and rest like we mostly did this last trip. Independence is one of the things most treasured by kids at family camp. Here’s a packing hack to encourage maximum independence.

For a round-up of the ten best family camps in the U.S., check out this article which includes a camp a days drive or less from everywhere in the continental U.S.

Adapted from an article first published July 8, 2017 at https://cozyclothesblog.com/ever-heard-of-family-camp-it-is-the-best-summer-family-vacation/

Back to Cozy Clothes Blog
x